The following newspaper article is taken direct from The Sunday Press, February 12, 1995.

DAN Fay and his son Eamon are shoemakers to the stars. In a quiet workshop off Dublin's Parnell Square they have crouched for weeks over their lasts, making the dancing shoes that have clattered in spectacular rhythm at the Riverdance show which premiered Thursday night. Sixty-four-year-old Dan has been making shoes for nearly 50 years but his trade - like Irish dancing itself - came in from the margins at last year's Eurovision when Jean Butler and Michael Flatley tapped their way into the nation's heart.

Ms Butler was wearing their handmade shoes that night, as were most of the backing dancers, and both Jean and Michael will be wearing them for the duration of the Riverdance Show. In addition, they have measured and fitted the Russian Cossack dancers with their shoes, along with the guest tap dancers from America and a host of the supporting performers. The Russians have also had their cossack dancing boots mended in the Fay workshop

Dan and Eamon will also be present backstage each night of the Riverdance show to carry out running repairs on broken straps, loose heels and any other emergencies that might occur. Ms Butler's shoes in fact were rushed by courier to their workshop last Thursday for a repair job just hours before the curtain went up on the show.

The shoes are made entirely from leather with a fiberglass tip at the toe and heel which produces that tap effect. The tip can range from a half to three quarters of an inch thick at the toe and can also be made from nails if the dancer prefers. Dan explained that the soft, supple leather they use gives the shoe terrific flexibility, which is an important factor for the dancers. "That is why they are so popular", he added. They also stitch the sole so the show as opposed to simply glueing it on.

The Fays' dancing shoes have been a feature of feiseanna all over Ireland for a number of years now but their biggest market is in America where they export almost 60 per cent of their business. Dancing teachers from Los Angeles to New York will frequently ring them with an order for 30 pairs or more at a time. Australia, New Zealand and the U.K. account for another 25 per cent of their market and Ireland the rest.

They visit the provincial, All-Ireland and world championships each year and have noticed an upsurge of interest in Irish Dancing, "especially since the Eurovision" 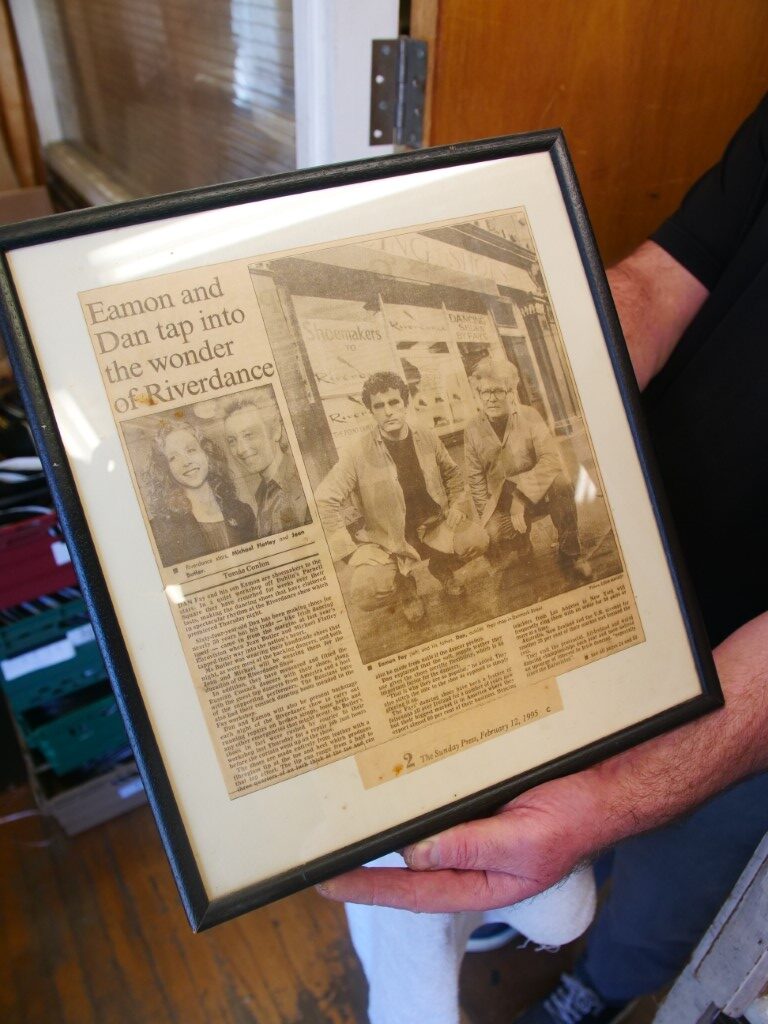 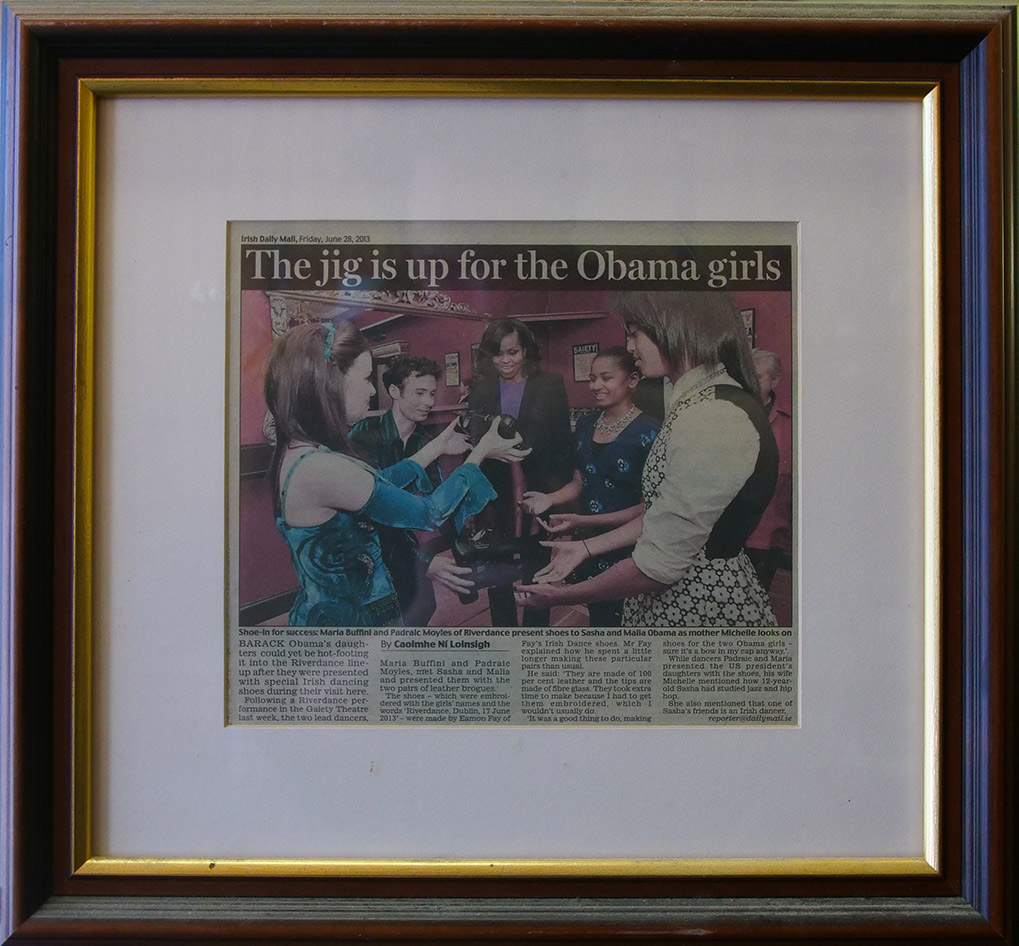 Fays for the First Lady

In June 2013, we were delighted to craft a pair of our dancing shoes as a gift for The First Lady Michelle Obama and her two daughters, Sasha and Malia Obama. These were presented to the Obamas by Riverdance lead dancers Maria Buffini and Padraic Moyes, prior to a special performance of Riverdance at The Gaiety Theatre, 18th June, 2013. Check out the following YouTube video for more pictures form the night.

We use cookies on our website to give you the most relevant experience by remembering your preferences and repeat visits. By clicking “Accept”, you consent to the use of ALL the cookies.
Cookie settingsACCEPT
Manage consent

This website uses cookies to improve your experience while you navigate through the website. Out of these, the cookies that are categorized as necessary are stored on your browser as they are essential for the working of basic functionalities of the website. We also use third-party cookies that help us analyze and understand how you use this website. These cookies will be stored in your browser only with your consent. You also have the option to opt-out of these cookies. But opting out of some of these cookies may affect your browsing experience.
Necessary Always Enabled

Performance cookies are used to understand and analyze the key performance indexes of the website which helps in delivering a better user experience for the visitors.

Analytical cookies are used to understand how visitors interact with the website. These cookies help provide information on metrics the number of visitors, bounce rate, traffic source, etc.

Advertisement cookies are used to provide visitors with relevant ads and marketing campaigns. These cookies track visitors across websites and collect information to provide customized ads.

Other uncategorized cookies are those that are being analyzed and have not been classified into a category as yet.

SAVE & ACCEPT
Powered by